The charming city of Iasi is located in the northeast of Romania and is one of the oldest cities in Romania. Iasi is also the political, economic and cultural center of the province of Moldavia and a very popular city break destination in Eastern Europe due to its numerous sights. 500 years of history have left their mark on the city. The special mix of historical buildings, post-socialist buildings as well as modern architecture make Iasi a charming city you should have seen. The so-called Golden Plateau (Platoul de Aur), located between the Palace of Culture (Palatului Culturii din Iasi) and the Hotel Unirea (Piata Unirii), is home to numerous buildings worth seeing. 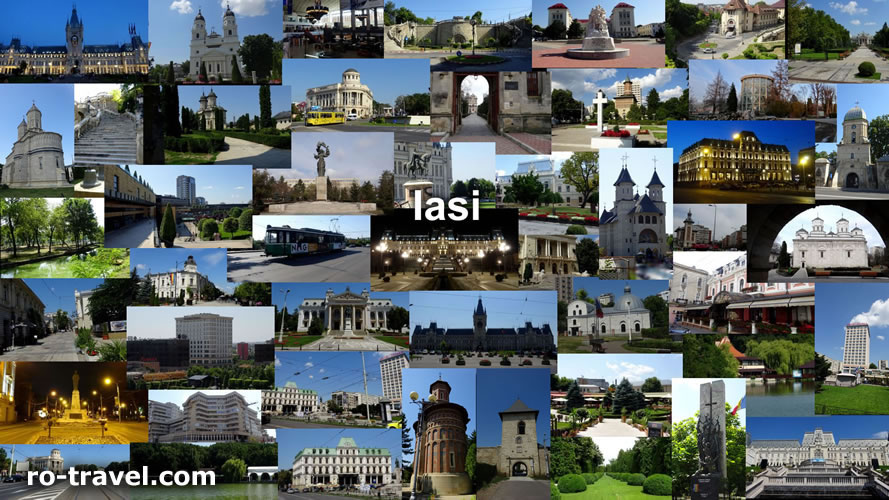 The Palace of Culture is the highlight of the city. The beautiful neo-Gothic style building now houses several museums, including the History Museum (Muzeul de Istorie al Moldovei) and the Art Museum ((Muzeul de Arta). The magnificent building is also located next to a modern shopping mall and is nestled in a small park. This place is special, make the effort and go down the steps to the left of the palace, because the palace is worth seeing from all sides. The modern mall and the historic building create a unique atmosphere. Take a seat in one of the adjacent restaurants or cafes and enjoy the view.

Not far from the palace is already one of the numerous churches worth seeing in the city. St. Nicholas Church (Biserica Sfantul Nicolae Domnesc) is the oldest church in Iasi and is decorated with typical Moldavian paintings. There are said to be over 100 churches in Iasi, some of which you should visit. In particular, the Catedrala Mitropolitana Sfanta Parascheva on Stefan cel Mare si Sfant Boulevard is a must-see for any visitor to the city. From the Biserica Sfantul Nicolae Domnesc you can get to the city’s magnificent Bulevardul Stefan cel Mare si Sfant. You should walk along it. Here you will find numerous sights. Among them is the 17th century Monastery of the Three Holy Hierarchs (Manastirea Sfintii Trei Ierarhi) and the Metropolitan Cathedral (Catedrala Mitropolitana Sfanta Paraschiva), which houses the relics of Saint Parascheva. Already visible from the boulevard, is the magnificent building of the National Theater. Take a detour there and then return to the boulevard. 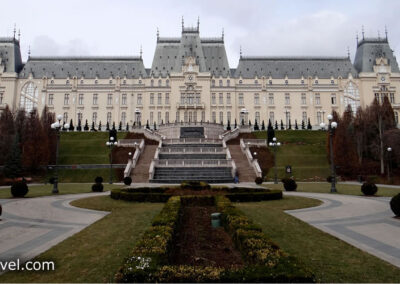 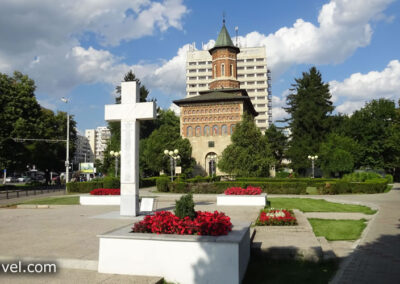 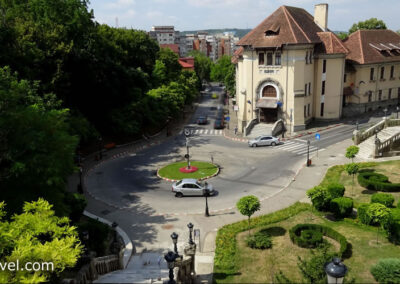 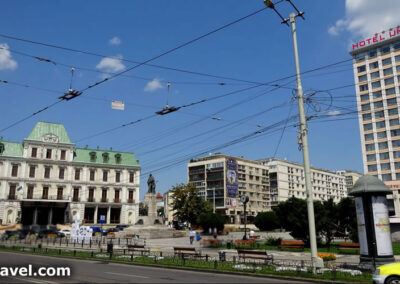 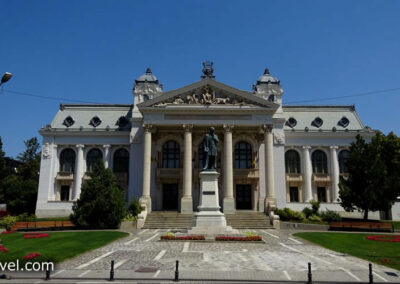 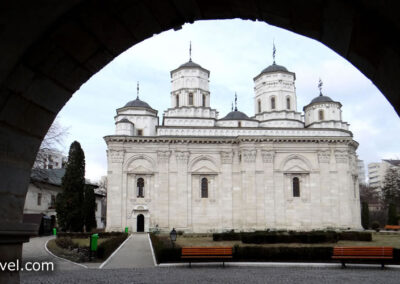 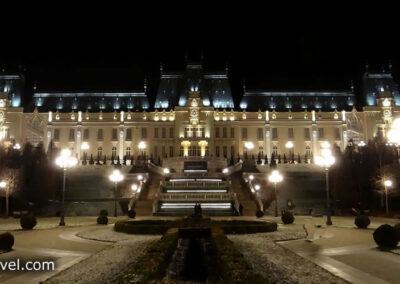 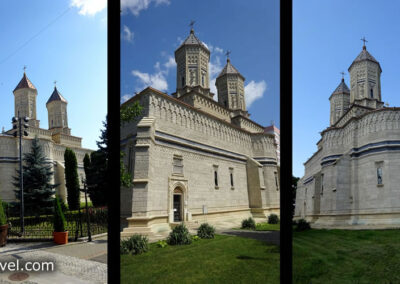 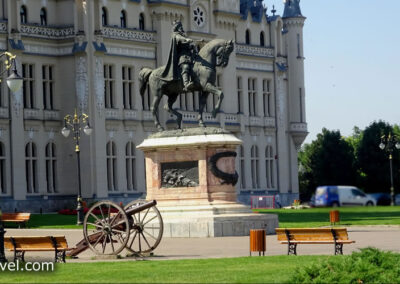 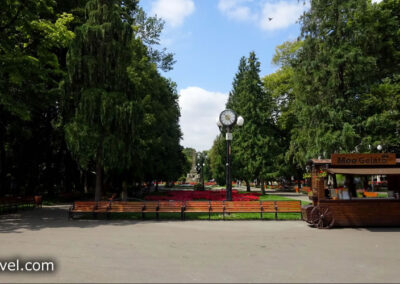 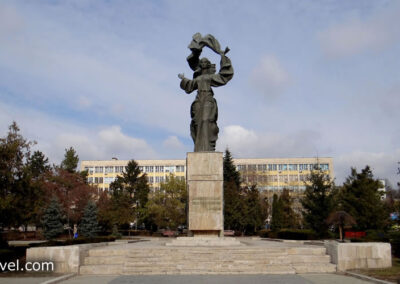 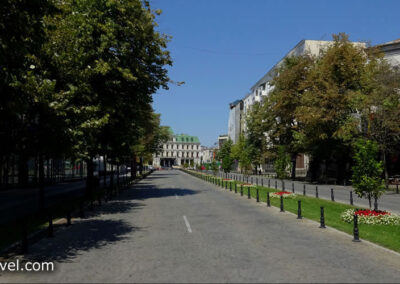 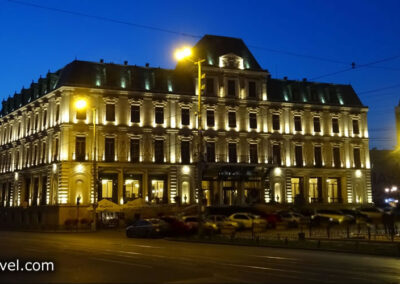 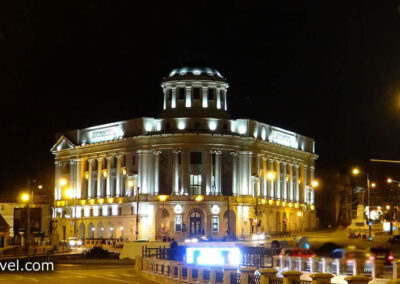 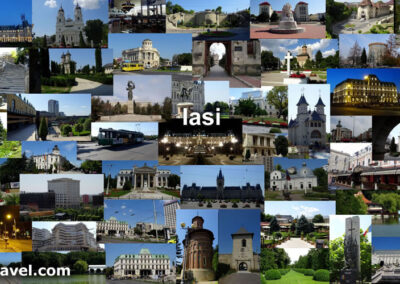 From Stefan cel Mare si Sfant Boulevard, continue to Piata Unrii, where the Unirea Hotel and the Grand Hotel are located. From here you will get to Bulevardul Indepentei where the Statue of Independence stands. Follow the bulevard in a westerly direction until you reach the square (Piata Mihai Eminescu) where the beautiful building of the Central Library and the statue of the Romanian poet Mihai Eminescu are located. Crossing Bulevardul Carol I, you will reach Parcul Copou, where you should take a break. Keep your eyes open during your tour of the city of Iasi, because there is a historical building on almost every corner. Noastalgic is also the streetcar in Iasi. You can easily take line 9 of the streetcar from Parcul Copou back to the historic center (Piata Unrii stop). What you should also have seen in Iasi is the bronze statue of Stefan cel Mare (Statuia ecvestră a lui Ștefan cel Mare), which stands in front of the Palace of Culture. A particularly beautiful street is Rapa Galbena, which is one of the monuments of the city since 2004. No less worth seeing is the Hotelul Traian (Grand Hotel) on Piata Unrii. Visit also one of the numerous museums of the city. Relaxation and rest from the hustle and bustle of the city can be found in the Botanical Garden (Gradina Botanica) in Iasi or in the already mentioned Copou Park.

Museums Iasi, in the...
Read More

The Oscar restaurant is...
Read More

In the city of Iasi there is...
Read More

There are said to be over...
Read More

In Iasi you will also find numerous restaurants and cafes. Among others, the restaurant Mamma Mia on Bulevardul Stefan cel Mare si Sfant, which offers traditional Romanian food & dishes, is recommended. International dishes are offered, for example, the hotel restaurant Select, on whose terrace it is good to dine. I would also like to mention the food court in Palas Mall, as there is a wide variety of dishes available.
The various accommodations range from simple guesthouses to 5 star hotels. The Hotel Arnia for example or the Hotel International. The nightlife of Iasi also offers everything that other bigger cities offer.
Come to Iasi and explore this charming city in eastern Romania.